The focus of the 4th International Holcim Forum was the economy of sustainable construction. The event, held by the Holcim Foundation for Sustainable Construction in Mumbai, India, was attended by about 400 representatives of various industries and disciplines from around 40 countries.

The ongoing economic challenges in many parts of the industrialized world are drivers of a paradigm shift: Governments, companies, and individuals are all becoming aware that although sustainable development incurs costs, it also offers considerable economic potential. This potential was investigated by the participants of the Holcim Forum in Mumbai.

In his keynote speech British star architect Sir David Chipperfield concentrated on the aspect of time. He pointed out that durability has always been an objective of architects – and that materially and immaterially enduring buildings are sustainable in a cultural sense and create public space independent of commercial interests. “At a time when it seems increasingly difficult, if not impossible, to create public space and any other collective form beyond the commercial, it becomes even more important that buildings exploit their potential to contribute whatever they can to an environment that represents the civilized ambitions of society,” said David Chipperfield.

Chilean architect Alejandro Aravena reported on the extensive rebuilding of the Chilean city Constitucíon, which was destroyed by a Tsunami in 2010. Construction projects in such a context must cost less than normal; otherwise they would not be accepted. At the same time, architects must respect this tenet: “Houses should be the opposite of cars: They should gain value over time. In social housing, that was not the case.” Yet the greatest challenge of high-quality reconstruction is not cost, but rather the multiplicity of players – coordination efforts were accordingly extensive: “The scarcest resource is synthesis in complex situations like a city.”

Lucas Bretschger, Economics Professor at the ETH Zurich specializing in climate and sustainability, reported on the potential of sustainable construction for controlling CO2 emissions. The construction industry plays a key role in achieving climate targets because it consumes roughly 40 percent of the primary energy. Bretschger’s conclusion: “There are direct economic benefits of sustainable buildings: durability, reduced costs for energy and water, maintenance, and a healthier and more productive environment. We must think how we can get the gains.” These gains can also be realized at low cost when the right micro- and macroeconomic and political conditions exist.

Indian architect Brinda Somaya described the local situation and concluded: “There must be very few countries in the world where architects have such varied challenges as we have in India today.” In her presentation, “Architecture as Resource,” she made it clear that efforts to build sustainably must not be limited to metropolitans such as Mumbai. The nearly 650,000 villages throughout the country also deserve attention. There, financial issues – and sometimes religious ones – often shape activities and force architects to find innovative solutions. Brinda Somaya: “The most appropriate solutions are brought about by the least authoritarian approach. Architects must become catalysts in the development process.”

The presentations by prominent experts largely characterized the Forum – but equally important at the event were the four workshops, distributed over three half-days, during which the participants exchanged their ideas on important aspects of the economy of sustainable construction. The topics were the improvement of informal settlements, densification, urban metabolism, and gains delivered by sustainable buildings. Highlights of the workshops included topic-related excursions in Mumbai. The participants visited new residential neighborhoods, sprawling informal settlements, traditional working-class neighborhoods, and exemplary individual buildings such as Kohinoor Hospital or the Palais Royale.

The closing panel discussion provided the opportunity to condense the impressions and approaches of the Forum, to further digest them, and to advance the ideas. The panel members were Marc Angélil (Switzerland), Ashok Lall (India), Werner Sobek (Germany), and Nirmal Kishnani (Singapore). They are convinced that a change of social mindset and political initiative still remain necessary in order to make sustainability the norm in building construction around the world. 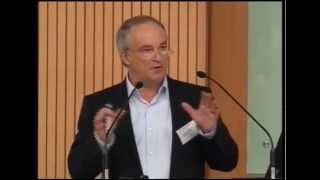 In his keynote speech at the 4th Holcim Forum 2013 in Mumbai, Lucas Bretschger, Professor of Economics at the ETH Zurich …