The 12 winning projects of the Holcim Awards 2014 for Latin America focus mainly on adaptability and social performance, and show how sustainable construction is developing multi-disciplinary responses to the challenges facing design and building. A public park above a series of reservoirs in Medellín, a low-impact timber rainforest center in Costa Rica and a pedagogically-aligned school in Mexico were awarded gold, silver and bronze.

The 12 winning projects of the Holcim Awards 2014 for Latin America focus mainly on adaptability and social performance, and show how sustainable construction is developing multi-disciplinary responses to the challenges facing design and building. A public park above a series of reservoirs in Medellín, a low-impact timber rainforest center in Costa Rica and a pedagogically-aligned school in Mexico were awarded gold, silver and bronze.

A jury of international experts led by Bruno Stagno (Costa Rica) selected the winners using the “target issues” for sustainable construction that emphasize the need for architectural excellence and a high degree of transferability – while also including the “triple bottom line” of environmental, social and economic performance. In Latin America, the Holcim Awards recognized 12 projects with a total of USD 330,000 prize money.

Improving life quality: Gold for remediation of an urban park 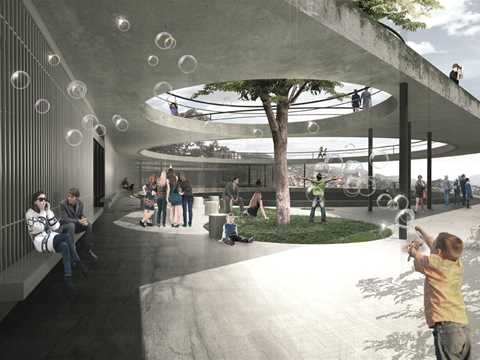 A landscape and urban design project for a public park in Medellín, Colombia, that merges social imperatives with technical requirements won the top prize. Architects Mario Camargo and Luis Tombé from Colectivo 720 in Colombia designed a park that encompasses landscape and urban design, as well as architecture and urban planning. The public space and pre-existing elements are transformed to create an outdoor auditorium and venues for a range of community activities.

At the prize giving ceremony in Medellín, Bruno Stagno applauded the Holcim Awards Gold project for exploring uncharted and interdisciplinary terrain. “Within the project, aesthetic, social, economic and environmental concerns are combined to form a sophisticated ensemble of public spaces and create a ‘socio-technical’ landscape of magnificent beauty”, he said.

Sustainability as common-sense: Silver for a low-impact timber rainforest center

The headquarters of Fundación para el Desarrollo de la Cordillera Volcánica Central in Puerto Viejo de Sarapiquí, Costa Rica, received the silver award. Román Cordero from PLUG architecture in Mexico designed an elevated wooden structure that is sensitive to its context and uses low-cost passive and active systems to minimize its environmental footprint. The wooden structure is covered by a roof constructed with panels made of recycled aluminium milk packages.

Changing the paradigm of education: Bronze for a pedagogically-aligned school

A school building in San Andrés Payuca in Mexico founded on an alternative educational model that integrates agriculture, farming and building construction into the curriculum received the bronze award. The self-built school design led by architects Julio Amezuca and Francisco Pardo of AT103 in Mexico proposes the use of cement-reinforced compacted earth blocks with tapered corners that permit assembly in a series of curves based on organic principles.

Damian Fernandez and Joaquin Trillo of Red Comunidades Rurales in Argentina were acknowledged for their center for water harvesting and agricultural production for indigenous and Criollo communities of the Chaco forest in Argentina. Further Acknowledgement prizes went to a site-responsive school in Jacmel, Haiti, designed by a Polish group of architects led by Maciej Suida with indoor and outdoor classrooms that form “neighborhood clusters”; a rural campus for the Universidad del Medio Ambiente in Acatitlán that is dedicated to sustainable development and community regeneration and was designed by a team led by Oscar Hagerman from Mexico; as well as an urban restoration project for Quito by Al Borde Arquitectos from Ecuador that proposes a “social economy” to refurbish the historic center of the city.

Four “Next Generation” prizes for inspiring visions of tomorrow 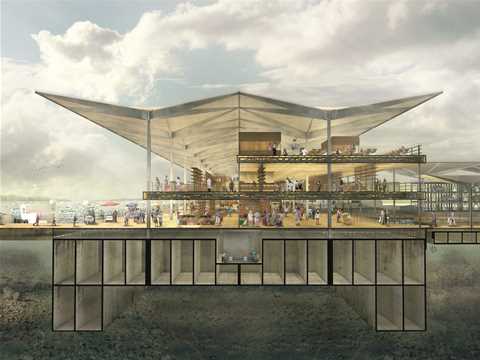 The Holcim Awards competition also seeks bold ideas in the “Next Generation” category for young professionals and students. The “Next Generation” 1st prize went to a team of students from the Universidad Nacional de Córdoba in Argentina for a riverside infrastructure redeployment plan for Manaus in Brazil. The proposal transfers activities currently on the fragmented waterfront onto a floating platform that connects the river and the city.

The Holcim Awards ceremony in Medellín for the competition region Latin America was the third in a series of five events following Moscow for Europe and Toronto for North America. Further events will be held in Beirut for Africa Middle East and Jakarta for Asia Pacific. The projects that receive Holcim Awards Gold, Silver and Bronze in each region automatically qualify for the Global Holcim Awards 2015.

The Holcim Awards for Sustainable Construction competition seeks innovative, future-oriented and tangible construction projects to promote sustainable responses to the technological, environmental, socioeconomic and cultural issues affecting building and construction on a local, regional and global level. The competition has been run by the Swiss-based Holcim Foundation since 2004 and offers USD 2 million in prize money per three-year cycle.

The Holcim Foundation is supported by Holcim Ltd and its Group companies in around 70 countries and is independent of its commercial interests. Holcim is one of the world’s leading suppliers of cement and aggregates (crushed stone, gravel and sand) as well as further activities such as ready-mix concrete and asphalt including services.