An independent jury led by Rahul Mehrotra (India) selected the winners using the “target issues” for sustainable construction that include the “triple bottom line” of environmental, social and economic performance, and also recognize the need for architectural excellence and a high degree of transferability. 13 projects to be implemented in nine countries in the Asia Pacific region were recognized with a total of USD 330,000 prize money.

Gold to a bird sanctuary in Thailand 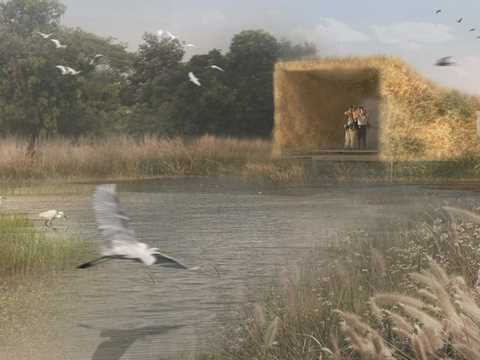 A bird sanctuary in northern Thailand that serves as both an educational facility and bird rehabilitation center won the Gold prize. The integrated approach to bird conservation by Jariyawadee Lekawatana of Achitectkidd and Singh Intrachooto of Kasetsart University in Bangkok, together with Chak Cherdsatirkul of Kaomai Lanna Resort, Chiang Mai, simulates the natural habitat and includes a small hotel and bird viewing tower. Palm fiber discarded from agricultural production is re-valued as a construction material for the building envelope which provides additional habitat and food sources for all birds in the area.

At the prize-giving ceremony in Jakarta, jury member Donald Bates (Australia) congratulated the Holcim Awards Gold winners for their innovative approach to addressing the devastating effects of bird trafficking on the survival of endangered wildlife. “The project’s stance is aligned with the principles advocated by the International Union for Conservation of Nature and combines architectural qualities with conservation, education, research and eco-tourism in a complete and convincing way,” he said.

The Lali Gurans orphanage and library in Kathmandu, Nepal by Hilary Sample and Michael Meredith of MOS Architects in New York, USA won Silver. The project addresses the needs of an under-served rural population with a facility that uses low-technology renewable energy and material resources, thus significantly reducing operating costs. Vertical gardens and permaculture provide thermal insulation as well as food for cooking. The project addresses the isolation of the orphanage as an institution by integrating the needs of the nearby communities through a library accessible to the public and a seismically-stable refuge area.

A project in the rural town of Ambepussa by Milinda Pathiraja of Robust Architecture Workshop in Colombo, Sri Lanka was awarded Bronze. The project aims to re-integrate former soldiers into post-civil-war society by providing training in building techniques through the construction of a community library. The slender building sits lightly in the landscape and wraps around an inner courtyard, taking full advantage of cross ventilation and daylight use, rammed-earth walls and recycled materials reduce the building’s ecological footprint.

Madhusudhan Rao Chalasani of MADE, Indiareceived one of the five equally-ranked Acknowledgement prizes for a community medical center and school in Tatiba Baraibura, Jharkhand, India that combines local materials and traditional craftsmanship with modern technology to create a simple yet sophisticated building. Benoît Jacquet of École française d'Extrême-Orient and Manuel Tardits of Mikan, Japan were acknowledged for a sustainable research center in Kyoto, Japan that uses advanced technological features as well as time-honored Japanese woodworking methods to allow rapid construction.

A further Acknowledgement prize went to a plan incorporating stakeholder participation for urban upgrading in Jakarta, Indonesia by Tomohiko Amemiya of UNITYDESIGN in Japan and a team from Universitas Indonesia that uses a two-step micro intervention to upgrade informal settlements in megacities. Two further recipients of Acknowledgement prizes were a response by Maj Plemenitas of LINKscale in the UK to the imminent threat of coastal erosion due to rising waters by using palm tree branches for the coastal protection of Tarawa Atoll, Kiribati; and an urban water transport system in Bangkok, Thailand by Santi Sombatwichatorn of D I Designs, Thailand that proposes to revive the ancient canals of the city to create a modern network of waterways and supplement the existing Metropolitan Rapid Transit systems.

Five “Next Generation” prizes for students and young professionals 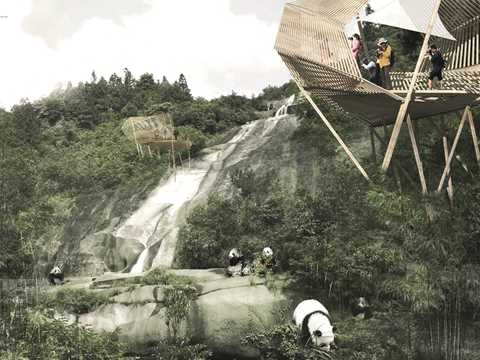 The Holcim Awards competition also seeks bold ideas for tomorrow in the “Next Generation” category for participants up to 30 years of age. The “Next Generation” 1st prize went to Harvard Graduate School of Design student Zhe Peng for the historic village reconstruction of Xueshan, China. The design proposes a post-earthquake reconstruction of a historic village in Sichuan Province that focuses on the unique local characteristics of the site, bamboo as the main building material and revives traditional construction techniques.

The Holcim Awards ceremony in Jakarta for the competition region Asia Pacific concludes a series of five events following Moscow for Europe, Toronto for North America, Medellín for Latin America, and Beirut for Africa Middle East. The projects that received Holcim Awards Gold, Silver and Bronze in each region automatically qualify for the Global Holcim Awards 2015.

The Holcim Awards for Sustainable Construction competition seeks innovative, future-oriented and tangible construction projects to promote sustainable responses to the technological, environmental, socioeconomic and cultural issues affecting building and construction on a local, regional and global level. The competition has been run by the Swiss-based Holcim Foundation since 2004 and offers USD 2 million in prize money per three-year cycle.

The Holcim Foundation is supported by Holcim Ltd and its Group companies in around 70 countries and is independent of its commercial interests. Holcim is one of the world’s leading suppliers of cement and aggregates (crushed stone, gravel and sand) as well as further activities such as ready-mix concrete and asphalt including services.