The Holcim Foundation for Sustainable Construction has appointed Marc Angélil, Alejandro Aravena and Maria Atkinson to its Board which frames the architectural, scientific, cultural, and policy concerns of the Foundation’s initiatives including the USD 2 million Holcim Awards competition.

As part of the Board’s renewal process embedded in the constitution of the Holcim Foundation, three members of the Board were due to step-down at the end of 2013. Marc Angélil (Switzerland), Alejandro Aravena (Chile) and Maria Atkinson (Australia) have been appointed to the Board, replacing Yolanda Kakabadse (Ecuador), Hans-Rudolf Schalcher (Switzerland), and Klaus Töpfer (Germany) who had made decisive contributions since the Foundation was formed in December 2003. 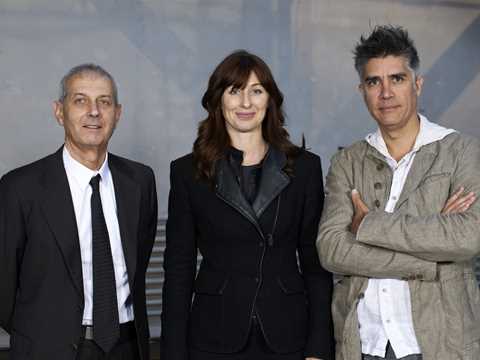 Marc Angélil (pictured left) is Senior Dean of the Department of Architecture at the Swiss Federal Institute of Technology (ETH Zurich), Switzerland. His research at the Network City and Landscape competence center of the ETH Zurich addresses recent developments at the periphery of large metropolitan regions. He also heads the Academic Committee (AC) of the Holcim Foundation. Marc Angélil returns to the Board after being a founding member from its inception in 2003 until 2010. As Head of the AC, Marc Angélil succeeds Hans-Rudolf Schalcher.

Alejandro Aravena (pictured right) is Executive Director of Elemental, a socially-motivated architectural practice based in Santiago, Chile. “Sustainability is nothing but the rigorous use of common sense. I look forward to working on this vastly important topic for architects, engineers, planners, developers and contractors within the context of the Holcim Foundation”, he said.

Maria Atkinson (pictured above, center) is a sustainability business adviser who is recognized for her leadership and strategic vision in driving and delivering commercially-successful sustainable outcomes at both a project and organizational level in the property industry. She was the Founding CEO of the Green Building Council of Australia and is Past Chair of the United Nations Environment Programme – Sustainable Buildings & Climate Initiative.

In announcing the Board appointments, Chairman of the Board of the Holcim Foundation, Rolf Soiron (pictured right), also acknowledged the contribution of outgoing Board members. “The Holcim Foundation is truly indebted to Yolanda Kakabadse and Klaus Töpfer for their insightful support since the formation of the Board, and to Hans-Rudolf Schalcher (pictured left) for his immense personal commitment in contributing to the international reputation of both the Holcim Awards competition and the Holcim Forum with industry professionals and leading thinkers,” he said.

The Swiss-based Holcim Foundation promotes sustainable responses to the technological, environmental, socioeconomic and cultural issues affecting building and construction at the national, regional and global levels. It is supported by Holcim Ltd, one of the world’s leading suppliers of cement and aggregates, and its Group companies in 70 countries. 10th Anniversary of the Holcim Foundation