The American Institute of Architects (AIA) Institute Honor Awards for Regional & Urban Design celebrate projects that expand the role of the architect beyond the building and into the realms of urban design, regional and city planning, and community development. The BIG U was one of four recipients of the award for 2015, along with: Beijing Tianqiao (Sky Bridge) Performing Arts District Master Plan by Skidmore, Owings & Merrill; Government Center Garage Redevelopment in Boston by CBT Architects; and Target Field Station in Minneapolis by Perkins Eastman. 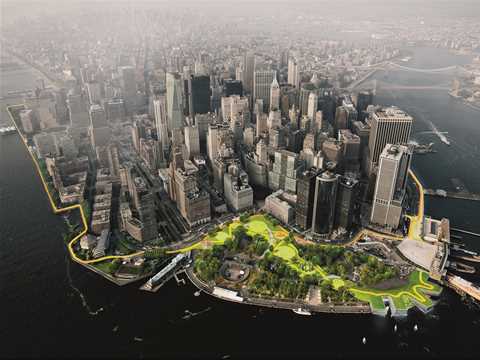 The BIG U is a 10-mile protective ribbon in Southern Manhattan that addresses vulnerabilities exposed by Superstorm Sandy in 2012. The BIG U consists of three components: BIG Bench, Battery Berm, and Bridging Berm. BIG Bench is a continuous protective element adapted to the local context that mediates new and existing infrastructure. The Battery Berm weaves an elevated path through the park, enhancing the public realm while protecting the Financial District and critical transportation infrastructure. This signature building features a “reverse aquarium” that enables visitors to observe tidal variations and sea level rise. The Bridging Berm rises 4 meters by the highways, connecting the coast and communities with greenways.

The American Institute of Architects New York Chapter (AIANY) Community Development Award was established in 1985 to recognize and acknowledge projects and individuals who have had a substantial impact on the built environment within the various localities of New York State or on the State of New York as a whole.

The Holcim Awards Silver winning project under the title the BIG U (East River Park) was one of six design proposals selected by in the US Department of Housing & Urban Development (HUD) Rebuild by Design competition. HUD allocated USD 920 million to New York, New Jersey, and New York City to begin implementation of the winning projects that will make the region more environmentally and economically resilient.

The Bjarke Ingels Group (BIG) proposal of a protective system around Manhattan’s edge is driven by the needs and concerns of the community. Building on the New York City Special Initiative for Recovery and Rebuilding (SIRR) report, the BIG Team weave together infrastructure investments with a community approach. 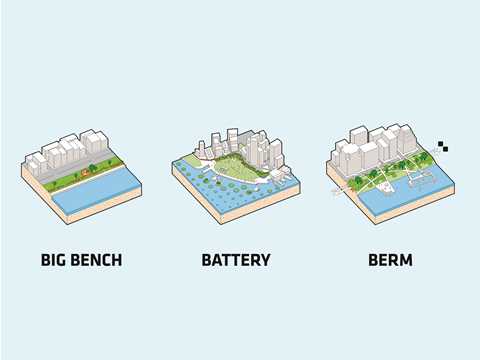 Community Development Block Grants Disaster Recovery (CDBG-DR) funds will be used to implement the first phase of the proposal along the Lower East Side, creating a “bridging berm” at the East River Park. The bridging berm provides robust vertical protection for the Lower East Side from future storm surge and rising sea levels. The berm also offers pleasant, accessible routes into the park, with many un-programmed spots for resting, socializing, and enjoying views of the park and river. Both the berms and bridges will be wide and planted with a diverse selection of salt tolerant trees, shrubs, and perennials to create a steadfast urban habitat.

The overall proposal protects ten continuous miles of low-lying geography that comprise an incredibly dense, vibrant, and vulnerable urban area. The proposed system not only shields the city against floods and stormwater, it also creates and provides social and environmental benefits to the community through an improved public realm.

Rebuild by Design was created in mid-2013 by President Obama’s Hurricane Sandy Rebuilding Task Force as a way to develop ideas capable of dramatically improving the physical, ecological, and economic resilience of coastal areas. The competition has produced regional, cross-disciplinary collaboration between state and local governments, the ten design teams, regional non-profit organizations, educational institutions, and the public. The Rockefeller Foundation has been the lead financial supporter of the competition. Teams worked to create coalitions with local and regional stakeholders to develop locally-responsive proposals to improve the tenacity of waterfront communities.