A heavy snowfall in the Spanish town of Cehegín caused a landslip that destroyed a cluster of houses on a steep embankment in the old quarter. The area was not repaired and became known as “El Coso”. Little by little, the area deteriorated even further and interrupted the flow of adjacent streets, while the townsfolk created ad hoc paths to traverse the urban void.

A project to rehabilitate the area in both economic and botanical means has now been implemented by Madrid-based architects Cómo Crear Historias. The project was an Awards Acknowledgement prizewinner led by Monica García Fernández and Javier Rubio Montero. The young architects aimed to heal the visible and structural wound in the territory through a habitable garden that produces water. 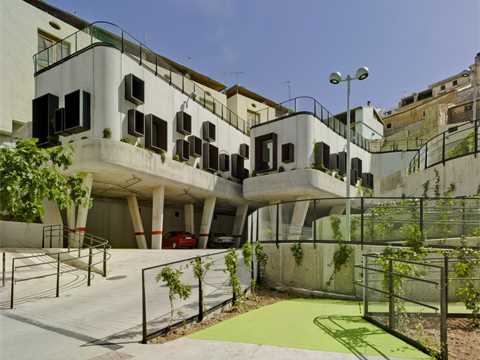 The rubble was removed and the new design uses paths formed by townsfolk crossing this urban fracture. Due to low rainfall and water availability, the town also lacked green spaces: so Cómo Crear Historias’ rehabilitation program included rainwater collection, gray water filtration and purification ponds to provide sufficient water supply for the plant life incorporated into the project. The new paths to interconnect the neighborhood were based on the “desire paths” used by locals, but including street lighting, and adapted slopes to meet contemporary regulations. To achieve a comfortable slope, many of the natural paths twist on themselves, increasing their length.

A business incubator (pictured left) encourages enterprise back into the area and stimulates economic and social activity in the neighborhood; both scarce resources. An additional benefit was the use of local workers for developing many of the tasks – some were former inhabitants of dwellings that collapsed in the neighborhood. After four years of construction, the project was officially opened in March 2015.