A sustainable building with civic significance

Using materials and techniques to reduce emissions and environmental performance

The Sara Culture Centre in Skellefteå, currently one of the tallest wooden high-rises in the world, aims to be accessible and enhance the city’s attractiveness. The design by Oskar Norelius, Robert Schmitz, and their team from White Arkitekter won an international design competition in 2015 for a new cultural center in the heart of the city of Skellefteå in the north of Sweden.

In the Sara Culture Centre, named after the Swedish writer Sara Lidman, all of the columns, beams, decks, and walls of the cultural center were prefabricated in a local factory and assembled on site. This method reduces the emissions and gray energy generated from transporting materials over longer distances, reduces construction time and cost, and creates work for local companies.

The hotel tower has a double-layer glazed façade through which the wooden structure remains visible. Between the inner layer of high-performance triple glazing and the outer layer of glazing is an adjustable sunscreen made of glue-laminated timber (GLT) louvers. The double-skin glazing encloses an insulating air space that envelops the entire high-rise. This enhances the thermal efficiency of the entire building – an advantage not to be underestimated, since Skellefteå is located close to the Arctic Circle and has correspondingly cold winters. 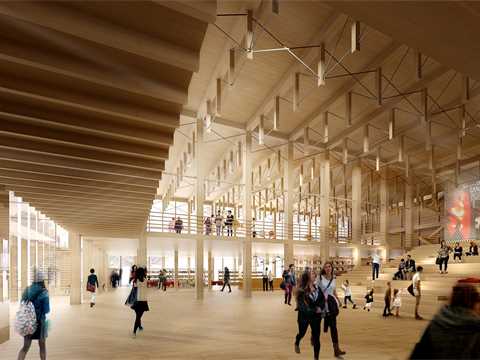 To maximize overall energy efficiency a hybrid ventilation system was installed to provide controlled ventilation to the large foyers and theater stages. This significantly reduces the loads on the main HVAC system. The architects also implemented a smart grid equipped with an AI unit that, over time, learns to autonomously predict and control the building’s energy consumption according to projected use and occupancy.

The Sara Cultural Center is to become a meeting place for the people of Skellefteå, whether they are interested in culture, want to borrow a book, or just want to talk to each other in a warm, cozy environment.