Yemen is one of the most unstable nations in the world, with various groups fighting for power in since 2013. Iraqi-British architect Salma Samar Damluji and colleagues in Yemen established the Daw’an Mud Brick Architecture Foundation in 2008. The foundation based in Hadramaut Governorate has been working on earth construction and post-war reconstruction projects.

As part of the reconstruction project that won a Holcim Awards prize, the architect and her team focused on five Sufi shrines and two mosques. The two domes of Al Habib Hamad bin Saleh in the coastal town of al Shihr were destroyed in 2015. The original buildings date to around 1400. The objective was to restore the buildings to their original condition using traditional Yemeni construction materials and methods. 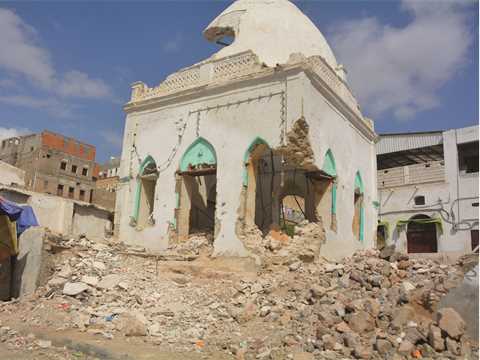 Since architectural plans didn’t exist before the buildings were destroyed, the architects had to reconstruct the buildings from photographs, historical documents, and the existing remains. Nearly all the stone needed for the reconstruction of the buildings, which took around six months, was salvaged from the rubble – an approach that is as sustainable as it is poetic: The new emerges from the remains of the old, like phoenix rising from the ashes.

Master builders and craftspeople from the region played a central role in the reconstruction planning and execution. They brought the knowledge and skills needed to reconstruct the structures using traditional building methods and materials – a nod to the cultural heritage of the region, but also an important measure in terms of the sustainability of the architecture.

“An integral way of thinking” in Sixth Holcim Awards