Carlos Piles is Head of Ductal Europe, an entity of Holcim based in Paris, France. The Museum of European and Mediterranean Civilizations (MuCEM) in Marseille, France was designed by architect Rudy Ricciotti. This avant-garde creation was the scene of several technical feats, made possible thanks to ultra-high performance concrete Ductal® from LafargeHolcim. Carlos Piles is Head of Ductal Europe, an entity of Holcim based in Paris, France.
» Download high-resolution version (JPG, 190.06 KB) The Museum of European and Mediterranean Civilizations (MuCEM) in Marseille, France was designed by architect Rudy Ricciotti. This avant-garde creation was the scene of several technical feats, made possible thanks to ultra-high performance concrete Ductal® from LafargeHolcim.
» Download high-resolution version (JPG, 2.52 MB) The LafargeHolcim Awards for Sustainable Construction gives many projects the boost to achieve realization and is part of countless success stories being written by aspiring and established professionals. A prize in the competition opens new doors for many of the winners, like the Spanish architect Carlos Piles: thanks to two prizes from the LafargeHolcim Foundation, he has made an exciting step in his career – to LafargeHolcim!

In 2011, Carlos Piles was a member of a team of architects that won a Next Generation prize for their project CASTonCAST, and a year later the Global Innovation Award. “Back then we were four crazy students,” he recounts, “we knew that you have to think beyond your own back yard if you want to achieve something truly innovative. We wanted to break the boundaries and play outside the box, and that made us push for innovation.”

As well as Carlos Piles, the team of “crazy students” included Lluis Enrique, Povilas Cepaitis and Diego Ordoñez – who were awarded for their project not once but twice, confirming that they were on the correct path. “Then we knew that our hope was indeed reality: Innovation does receive acknowledgement!” says Carlos Piles. The LafargeHolcim Awards prize money enabled the young architects to apply for a patent for CASTonCAST and thus to keep the project in their own hands during the next phase of development (see separate article in sidebar).

The two prizes gave the project and its creators significant publicity and attention – and opened numerous doors as well. “After completing my Master’s studies at the Architectural Association School of Architecture in London, I had the chance to work with internationally-renowned Zaha Hadid Architects and then Skidmore, Owings and Merrill in London, among others,” tells the Spaniard. “At both interviews, the first project I mentioned was CASTonCAST and the fact that it had been awarded a prize in the international competition of the LafargeHolcim Foundation; and everyone was duly impressed by the recognition the project had received.”

The prizes also helped him successfully make contacts in the industry sector. “I had the chance to present the prize-winning project to people such as Carlos Espina, who was intrigued by our project.” Espina, today CEO of LafargeHolcim Argentina, was at that time head of the Group’s Research & Development Center in Lyon.

Innovation on another level

Carlos Piles is still at the beginning of his professional career in the industry. What persuaded him, an architect, to switch to industry and management and join LafargeHolcim? “This company places great value on innovation, and that’s also one of my key interests,” explains the 34 year-old architect. “After we won the prizes, I had the chance to get to know quite a few people at LafargeHolcim. They explained to me the vision the company is pursuing.” And it’s precisely this innovation drive that has made the company the leader in its industry, explains Piles. The ambition to remain ahead is obvious: “Just take a look at what’s going on in the Research Centre in Lyon!”

Always one step ahead

Carlos Piles has been Head of Ductal Europe, an entity of LafargeHolcim based in Paris, since February 2017. Ductal is an ultra-high strength concrete that excels by virtue of its durability and performance, among other attributes. “Historically, the focus of Ductal in Europe has been mainly on France,” tells Piles, “and now we also have interesting projects in the United Kingdom, Hungary, Russia and Switzerland.”

But can he quench his thirst for innovation in his new role, which mainly involves management and corporate strategy? “Innovation has to do not only with materials and products but also with how businesses are managed, asserts Carlos Piles. “For example, we must constantly find new ways to communicate with customers as we develop new markets, and it’s very important that we integrate innovation into our products, technologies and services in order to provide new benefits for customers. This is something we are working on every day.” He sees his greatest challenge in keeping Ductal one step ahead and remaining poised to respond to new customer needs at all times.

Carlos Piles considers his position at Ductal the logical consequence of a development that began with CASTonCAST and the prizes by the LafargeHolcim Foundation. “Those two prizes definitely influenced my career,” he recaps. “As an architect they were a confirmation of my objectives and abilities, and regarding my career shift into industry they helped me find my way here.” Two different worlds for Carlos Piles, but he has the same motivation in both – pursuing his passion for innovation. This entry is focused on the development of a smart but simple methodology to design and prefabricate building elements with complex... 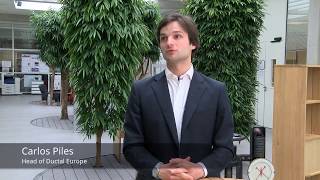 Carlos Piles is Head of Ductal Europe, an entity of Holcim based in Paris, France and multiple Holcim Awards prize-winner for “CASTonCAST:...