A showcase for Toronto and sustainable urbanization

The LafargeHolcim Awards Acknowledgement-prize winning Daniels Building at One Spadina Crescent houses the John H Daniels Faculty of Architecture, Landscape, & Design. The project is exemplary for embedding sustainability into the teaching, learning and research programs of the University of Toronto. The renovation and extension of the 1875 Gothic Revival building was designed by Nader Tehrani and Katherine Faulkner, of NADAAA in collaboration with Architect-of-record Adamson & Associates, landscape architects Public Work, and heritage architects ERA. The Daniels Building at One Spadina Crescent officially opened on November 17, 2017.

The building now includes a Graduate Design Studio with a column-free span of over 34 meters that incorporates an undulating ceiling with 11 clerestory windows; the Eberhard Zeidler Library collections in architecture, landscape architecture and urban design; an extensive workshop and double-height Fabrication Lab; and, the Commons – an interior “main street” and gathering space that links the city center with the university. The Green Roof Innovation Testing Laboratory (GRIT Lab) is studying the integration of harvested rainwater on the site, and a 750-square-meter Architecture & Design gallery is under construction.

The President of the University of Toronto, Meric Gertler, explained at the official opening that the project contributes to the university’s reputation as a world-leader for the study of architecture, landscape architecture and design. “One Spadina heralds a new era of local, national, and international impact on the part of our professors and students whose work is already helping to re-define urbanism in the 21st Century,” he said.

In addition to the LafargeHolcim Awards Acknowledgement prize of 2014, the project has also received: a “Best of 2017” prize in the higher education category from Interior Design magazine (2018); an honorable mention from The Plan magazine (2017); the Architectural Award of Excellence from the Canadian Institute of Steel Construction (2017); and a Green Good Design Award from the Chicago Athenaeum (2014). 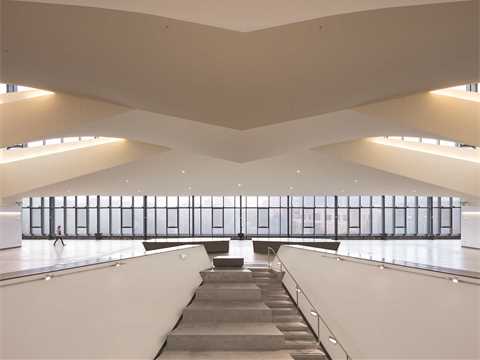 In announcing One Spadina as winner in the higher education category of Interior Design magazine’s “Best of 2017”, the spatial complexity and intelligent renovation was praised – “Designing a space that will in turn inspire great design. That was the heady task that principals Nader Tehrani and Katherine Faulkner undertook at this undergraduate and postgraduate facility. What they accomplished is a rich mix of old and new, patina and polish.”

The transformation of this iconic building has doubled the size of the previous facilities and created a new and unprecedented district for education, research, and public outreach on architecture, urbanism, and the visual arts at the University of Toronto.