One of the three precincts of the prize-winning scheme is close to completion. As the project is implemented, water quality in the River Fez has begun to be restored and the northern part of the river which was previously paved over with concrete slabs has been uncovered. There has been ongoing progress at the site of the Global Holcim Awards Gold 2009 winning project in the UNESCO World Heritage listed old town of Fez, Morocco.

One of the three precincts of the prize-winning River remediation and urban development scheme has been completed in the Medina of the Moroccan imperial city. Aziza Chaouni and Takako Tajima, Principals of Bureau EAST were awarded the Global Holcim Awards Gold prize in 2009 with a multi-sited and multi-functional project that is centered upon the recovery of the river Fez. Work on restoration triggers a range of interventions in the Medina.

Rebuilding the fabric of a living city

One of the three precincts of the Award-winning project which will take advantage of vacant sites to reestablish a connection with the city fabric is close to completion. The “el-Rcif Plaza” melds the transportation hub and the river bank circulation system and allows for the cleaning of runoff water. The “el-Rcif Plaza” was previously cluttered with buses, taxis and informal parking – but is now a core of the pedestrian network. A larger parking facility has been constructed beyond the southern city walls of the Medina, and buses and taxis have been re-positioned.

The next steps including urban furniture, canopies and benches, and rehabilitation of the river banks will mark the completion of the “el-Rcif Plaza” section of the project. The large open space is turning into a popular night-time meeting place. During the day the trees are still too small to provide reasonable shade in summer, but the square comes to life during the cooler months and in the evenings with families and people of all ages playing football, chatting or simply sitting on the amphitheater-style seating, people watching. 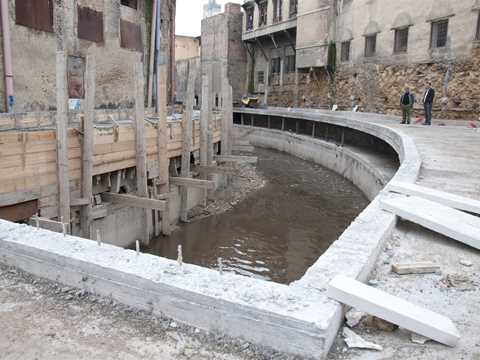 The City of Fez Department of Water & Power (RADEEF) is implementing a new system that will channel the city’s water sewage towards two treatment plants. This will stop the Fez River from being polluted by sewage overflow and will allow the river to regain its potential as a public amenity. The rehabilitation plan for the river and acupunctural interventions along its banks within the medina will use a range of rehabilitation tactics that account for soil geomorphology, levels of water pollution, adjacent urban fabric and ecological systems. The revitalized system will include canal restorers, constructed wetlands, bank restoration and storm-water retention ponds.

The river that had been covered by concrete culverts has been re-opened, creating a pleasant riparian zone for pedestrians on both sides of the waterway. Bridges have been restored and sewage channels are covered to form additional public spaces.

“The moment things changed was when we won two very important design prizes, called the Holcim Award for Sustainability in 2007. It’s one of the most lucrative prizes — up to USD 400,000 for the Gold Regional and Global awards — in the design field. The prize brought the Fez River, its problems and potentials to the attention of a large public”, says architect and engineer, Aziza Chaouni.

As the project is implemented, water quality in the River Fez has begun to be restored, and the northern part of the river which was previously paved over with concrete slabs has been uncovered. This was an extremely challenging task since the adjacent buildings and their foundations are fragile and several centuries old. The sewage pipelines which previously emptied directly into the river have been diverted.

The notoriety of the River Fez urban revitalization project and recognition through the Global Holcim Awards Gold 2009, an array of further initiatives under the auspices of UNESCO and various American NGOs have been launched – building on the positive impact of the project developed by Bureau EAST.

“The river has been resuscitated”

Architect and engineer of the River remediation and urban development scheme in the old town of Fez has been deeply engaged in the project since she was advised to investigate “something that you feel passionate about and that could make a difference” by her thesis supervisor at Harvard University. Working with the city’s water department since 2007, she’s now restoring and reconnecting the riverbanks with the rest of the city, while creating open, green public spaces, allowing the medina to breathe again – “so that Fez can remain a living city, rather than a mummified heritage.”

Aziza Chaouni now considers the core of the project’s vision has been implemented: the river has been resuscitated, both figuratively and literally. It is uncovered and acknowledged by all as a “river,” not a sewer. This presents a unique potential for the medina of Fez. A key lesson we have learned is that a resilient design project, with a solid core idea, can surmount any changes that come its way. Its core idea will remain, even though its aesthetics, timeline, methodology will drastically change.

In architecture school, we are taught that one’s project should be implemented as closely to one’s drawings as possible. In developing-world contexts, especially while working on municipal projects, this task is almost impossible. The architect needs to leave his or her ego in the back seat and develop a resilient, phased design with key principles that can sustain changes of stakeholders in the socio-political sphere, with the economic landscape and so on.