Brinda Somaya, Principal Architect & Managing Director, Somaya & Kalappa Consultants (SNK), based in Mumbai, India and Member of the Board of the Holcim Foundation at the 6th International Holcim Forum 2019 held in Cairo, Egypt. Brinda Somaya is Principal Architect & Managing Director of Somaya & Kalappa Consultants (SNK), in Mumbai, India and is a member of the Board of the LafargeHolcim Foundation. “Some women architects from South Asia have transformed their offices into creative powerhouses,” explained Brinda Somaya. Brinda Somaya is Principal Architect & Managing Director of Somaya & Kalappa Consultants (SNK), based in Mumbai, India and is a member of the Board of the LafargeHolcim Foundation for Sustainable Construction. Brinda Somaya, Principal Architect and Managing Director of Somaya and Kalappa Consultants was a keynote speaker at the 4th International Holcim Forum on “Economy of Sustainable Construction” held at the IIT Bombay, Mumbai in April 2013. Brinda Somaya is Principal Architect & Managing Director of Somaya & Kalappa Consultants (SNK), in Mumbai, India and is a member of the Board of the LafargeHolcim Foundation.
» Download high-resolution version (JPG, 797.37 KB) Brinda Somaya is Principal Architect & Managing Director of Somaya & Kalappa Consultants (SNK), based in Mumbai, India and is a member of the Board of the LafargeHolcim Foundation for Sustainable Construction.
» Download high-resolution version (JPG, 3.14 MB) Brinda Somaya, Principal Architect and Managing Director of Somaya and Kalappa Consultants was a keynote speaker at the 4th International Holcim Forum on “Economy of Sustainable Construction” held at the IIT Bombay, Mumbai in April 2013.
» Download high-resolution version (JPG, 989.06 KB) The Government of India appointed her Chairperson of the Board of Governors of the School of Planning & Architecture (SPA) at Vijayawada (2016-). SPA is one of three schools of planning and architecture designated as an “Institute of National Importance”.

She is an architect and urban conservationist who has merged architecture, conservation and social equity in projects ranging from institutional campuses and rehabilitation of a village impacted by an earthquake, to the restoration of an 18th century cathedral. She founded SNK in 1978.

Brinda Somaya was elected by the President & Board of Trustees of Cornell University as an Andrew D White Professors-at-Large (2017-). At any one time, up to twenty outstanding intellectuals from across the globe hold the title “Professor-at-Large” and are considered full members of the Cornell University faculty. During their six-year appointment, each Professor-at-Large visits the campus for about a week in each three-year period while Cornell classes are in session during the academic year under a single mandate - to enliven the intellectual and cultural life of the university.

Brinda Somaya studied architecture at Mumbai University, and was awarded a Master of Arts and Honorary Doctorate from Smith College in Northampton, MA, USA. She is involved in progressive conservation, such as the restoration and renovation of the Cathedral and John Connon Schools and the St Thomas Cathedral, for which she received a UNESCO Asia Pacific Heritage Award (2004).

The Indian Institute of Architects (IIA) awarded her the Baburao Mhatre Gold Medal for excellence in the field of architecture (2014). It is the highest honor of the IIA for lifetime achievement in architecture. She received a special mention in the International Union of Architects (UIA) Vassilis Sgoutas Prize for the Bhuj Village project (2008). The UIA prize recognizes individuals and groups contributing in an efficient manner to the struggle against misery of those living below the poverty line. She was the first woman to win the peer-evaluated Wienerberger Golden Architect Award (2007) for lifetime achievement.

She received the Award of Distinction from the UNESCO Asia Pacific Award for Cultural Heritage Conversation (2019) for the conservation of the Vikram Sarabhai Library at the Indian Institute of Management campus in Ahmedabad, India. Through careful studies and extensive modelling, the conservation team conquered a range of difficult technical challenges to extend the life of the composite brick and concrete structure with its distinctive geometric forms. She has also received awards for master-planning and building design including Tata Consultancy Services, Banyan Park, Mumbai; Nalanda International School, Vadodara; Zensar Technologies, Pune; and is restoring the historic Louis Kahn Buildings of the Indian Institute of Management, Ahmedabad (IIM-A).

Brinda Somaya was chosen in the 100 Global Public Interest Design persons working at the intersection of design and service globally (2013). Public Interest Design places emphasis on sustainable design that includes ecological, economic, and social issues; and on designing products, structures, and systems that address issues such as economic development and the preservation of the environment.

She was a keynote speaker at the 4th International Holcim Forum on “Economy of Sustainable Construction” held at the IIT Bombay, Mumbai (2013); and was a member of the Holcim Awards jury for region Asia Pacific (2014) and the Global Holcim Awards jury (2018 & 2021).

Brinda Somaya became a member of the Board of the Holcim Foundation for Sustainable Construction (2017-).

The jury of nine experts are currently selecting the global prize winners in the 6th International LafargeHolcim Awards for Sustainable Construction. The 33 finalist projects from 25 countries are displayed as a poster exhibition in Zurich…

A jury of nine experts will meet to select the global prize winners of the 6th International LafargeHolcim Awards for Sustainable Construction. 33 finalist projects from 25 countries will take part in the global phase of the competition.…

A jury of nine experts headed by Hashim Sarkis, Dean of the MIT School of Architecture & Planning, will evaluate entries in the Global phase of the 6th International LafargeHolcim Awards in 2021. The competition is currently open for…

Nobody responded to the first attempt of Brinda Somaya to organize a conference for female architects in 1990. Ten years later she was overwhelmed by the interest shown in the inaugural “Women in Architecture 2000 Plus” conference – and two…

Brinda Somaya is the Principal Architect & Managing Director of Somaya & Kalappa Consultants based in Mumbai, India. She has been involved with the LafargeHolcim Foundation for Sustainable Construction since 2014, when she was a member of… 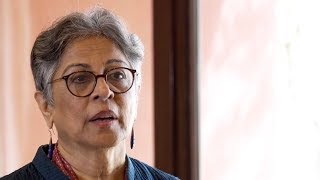 “From new construction to waste collection – re-materializing has many angles,” says Brinda Somaya following the …