Michael Sorkin was Distinguished Professor of Architecture and Director of the Graduate Program in Urban Design at The City College of New York; and Founder of Terreform, a research studio for exploring sustainability.

Michael Sorkin was Distinguished Professor of Architecture and Director of the Graduate Program in Urban Design at The City College of New York (CCNY).

He was also Founder of Terreform, a non-profit organization devoted to urban and environmental research and intervention. Research includes a project to examine the limits of self-sufficiency within New York City and a study on sustainable transport systems.

His design practice Michael Sorkin Studio devoted to both practical and theoretical projects at all scales has a special interest in sustainable urban environments/green city architecture. Projects include master planning in Hamburg, Visselhövede, Leipzig and Schwerin, Germany; planning for a Palestinian capital in East Jerusalem; planning and design for a highly sustainable 5000-unit community in Penang, Malaysia; and studies of the Manhattan waterfront and Arverne, Queens, New York.

He studied architecture at Harvard University and the Massachusetts Institute of Technology (MIT), and held degrees from the University of Chicago and Columbia University.

He was Professor of Urbanism and Director of the Institute of Urbanism at the Academy of Fine Arts in Vienna (1993-2000). He was also professor at Cooper Union, Colombia, Yale and Harvard in the USA, as well as the Architectural Association in London, the Aarhus School of Architecture in Denmark, Carleton University in Ottawa, Canada.

Michael Sorkin is author of many texts for general and professional audiences. He was contributing editor at Architectural Record and Metropolis, and architecture critic of The Village Voice for ten years. His books include Exquisite Corpse: writings on buildings, Local Code: the constitution of a city at 42 degrees north latitude, Giving Ground: the politics of propinquity (edited with Joan Copjec), and Wiggle, a monograph of the Sorkin studio.

Michael Sorkin Studio has received awards including three ID Awards and a Progressive Architecture Award. In 2005/06, Michael Sorkin directed studio projects for the post-Katrina reconstruction of Biloxi and New Orleans, and works on a plan for a self-sufficient, post-petroleum city in the Ecuadorian Amazon. In 2009, he was appointed a Fellow of the American Academy of Arts & Sciences.

Michael Sorkin was a member of the Concluding Panel Discussion at the 2nd International Holcim Forum 2007 in Shanghai and presented the case study “Feeding New York in New York” in the workshop Mine the city - With logistics to circular metabolisms at the 3rd International Holcim Forum 2010 in Mexico City. He also attended the 4th Forum 2013 “Economy of Sustainable Construction” in Mumbai.

He passed away on March 26, 2020 at the age of 71 after contracting COVID-19. He was praised by the Architectural Record for “one of the most distinctive voices for social justice and sustainability in the design of the urban environment”. 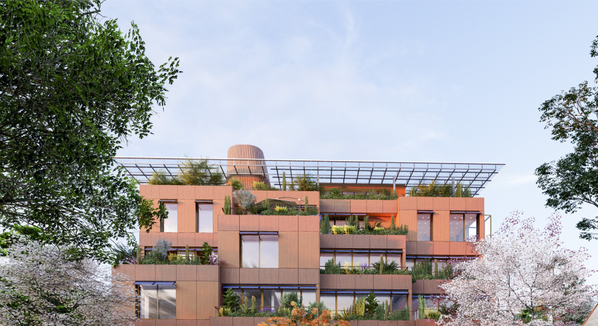 House as Garden in Illinois