Wetlands are among the most important ecosystems in the world – but they are endangered in many places. In the Colombian capital Bogotá, a team of architects is showing how damaged wetlands can be repaired and protected for the future. The project generates spaces for a relationship between inhabitants and the wetland. Wetlands are among the most important ecosystems in the world – but they are endangered in many places. In the Colombian capital Bogotá, a team of architects is showing how damaged wetlands can be repaired and protected for the future.
» Download high-resolution version (JPG, 8.42 MB) The project generates spaces for a relationship between inhabitants and the wetland.
» Download high-resolution version (JPG, 10.43 MB) This Holcim Awards winner by Medellin-based architects Connatural aims to salvage a badly damaged 5.5km-long wetland in Bogotá, Colombia. The vision to transform the wetland into a socially and ecologically significant park brings together art, architecture, and landscape design.

Wetlands are fragile yet vital ecosystems that are estimated to store at least ten percent of the world’s carbon. They also regulate water cycles, prevent flooding, retain nutrients that sustain a rich biodiversity, and act as reservoirs. Wetland destruction has deep environmental consequences on a global scale, and Bogota’s rapid population growth has led to the loss of 99% of the original 150,000 hectares of wetlands that initially surrounded the city. The remaining 1,500 hectares also have significant cultural value, tying in with the heritage of the area originally identified by the indigenous Muisca people as Bacata, or “high field”.

Restoring balance to a natural space

With over ten million inhabitants, Bogotá is one of South America’s fastest growing cities. West of the city, close to El Dorado Airport and bordering the Bogota River, the Jaboque Wetland was one of the few areas that remained largely untouched. But its proximity to urban sprawl had caused heavy pollution from sewage and garbage dumped by informal settlements of displaced people.

As part of the Wetlands of Bogotá, the Jaboque Wetland is listed on UNESCO’s Ramsar Convention list of the world’s most important wetlands. The municipal government aimed to conserve the area as part of a wider approach to addressing pollution of the Bogotá River, where sewage and industrial effluent have caused dead zones starved of oxygen.

Connatural was awarded the commission thanks to their expertise on hydraulic basins and ecological restoration. The architects designed a park that is as natural as possible by collaborating with biologists, civil engineers specializing in bio-construction, and the Bogotá Botanical Gardens. The project aims to ultimately re-plant 121,000 square metres of endemic flora while removing invasive species.

A social and cultural vision

The project also provides social and cultural amenities by creating much needed recreational outdoor space for residents. It also features an element of development: illegal and inappropriate structures were removed from the site, while various trails made of permeable concrete were built along the edge of the wetland. The paths provide various tracks for walkers and cyclists, while preserving the wetlands from being overused through minimal deployment of built infrastructure. “Amphibious” trails such as bridges were also included in the design, bird observation decks were installed, and environmental classrooms will eventually be set up to integrate nature education into the life of the community.

Community input was part of the project, with social workers, an anthropologist, community leaders and schools all helping to engage with local residents. The community recognized the value of the wetlands and wanted to take part in preserving them, as well as create spaces for community gardens.

The resulting project is a 5.5 kilometre-long park at the interface between nature and the city, restoring a vital natural habitat while building community and identity for residents around an enjoyable outdoor space.

Read the full interview “Back to Nature” in Sixth Holcim Awards

“Back to nature – Wetland Vitality in Colombia” in Sixth Holcim Awards 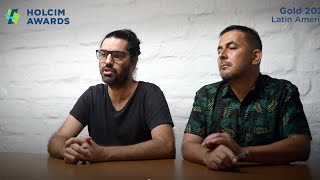 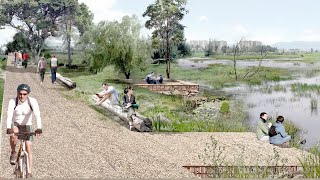 A landscape design for the recovery of a wetland in Bogotá creates environmental and social sustainability.