Water is a vital resource for all life, yet it is also associated with many of the greatest threats to humanity, from melting ice caps to toxic rivers. A holistic approach to water management can be an emblem for a culture of sustainability.

Chennai currently works with a perception of scarcity – water is transported across long distances from unsustainable sources to nourish the city. India’s fourth most populous urban agglomeration receives more than enough rain to supply its population of almost ten million people, but the rainwater is quickly expelled into the sea. Wastewater is not reused as an asset; but is allowed to pollute the aquifer. By closing the water loop locally through rainwater harvesting and wastewater recycling, Chennai can become resilient.

The way we live at the moment is an entirely different scenario. Cities have been designated places of consumption rather than part of the world ecology, even though they are dependent on natural processes. But if humanity in the Anthropocene has the power to alter the world to such an extent that it no longer supports life, it should also have the power to restore nature to ensure its continued existence in a sustainable manner.

Existing paradigms need to be updated, and nature and natural processes must be holistically integrated into the very cities that have tried to keep them out for centuries. Nature, rather than posing multiple risks, provides multiple benefits: vegetation can not only turn sewage into clean water for reuse, it also prevents floods and erosion, sequesters carbon, cools and filters the air, and provides space for biodiversity. 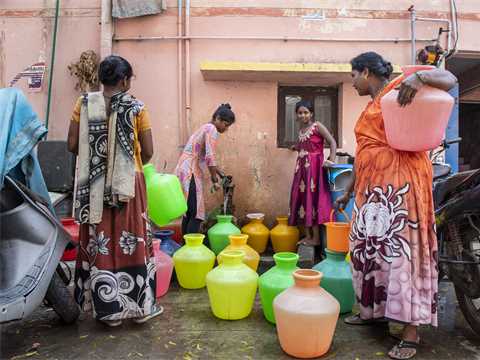 From “stealing” to “borrowing”

Putting nature back to work in resource production requires a different attitude: humanity will no longer “steal” (extract) water from Earth but rather “borrow” it. This means giving it back to the natural cycle of rainfall and evaporation in the same pure condition and amount in which we received it. By integrating nature into the urban realm, cities will be able to exist in harmony with the planet, not in opposition to it. In this new paradigm, there is no externality, there is no water debt for future generations – everything is connected to planetary ecology and economy. This future scenario will not be built at once but will grow incrementally through small local projects tied to a large-scale collective and sustainable vision.

The economy is buoyed by artificially deflated transportation costs helped by cheap fossil fuels redistributing materials around the globe while creating disparity and volatility. This centralization of resource management and production has made the processes that support life invisible and immutable: water magically comes out of a tap and is flushed far away; the consumer has no comprehension or agency in the system.

But an urban community that makes the reality of nature visible, collecting its own water, producing its own food and energy, and treating its own waste, is more likely to make rational, sustainable decisions than a community dependent on intangible networks. Stitching water systems into the urban fabric and overlaying them with multiple functions helps build local capacity, making these systems a tangible part of people’s lives.

How a systemic and holistic approach to water management can be designed, financed, and implemented in a dense urban context is the subject of the City of 1,000 Tanks project in Chennai. Centuries ago Chennai was a leading example of smart water management, demonstrating how urban communities could live in proximity to seasonal water hazards and still be in harmony with nature. Lakes, rivers, and temple tanks composed Chennai’s ecosystem. These water bodies acted as occasional reservoirs, absorbing water in the monsoon season and replenishing ground reserves for later use in the dry season. The urban patterns around them were adapted to annual change. Local communities were responsible for management and maintenance. 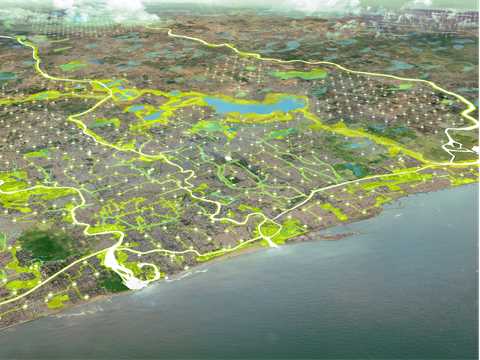 The city is now developing along a different path. Technical solutions neglect tradition and natural conditions and tend to be shortsighted. Today, Chennai’s peak seasonal rainfall is dumped into the ocean as quickly as possible through an extensive pipe system. Overwhelmed by the amount of rainfall and clogged by silt and sewage, these systems have failed to protect citizens from severe flooding. Half of the city’s sewage is expelled into rivers and storm drains, polluting the shallow aquifers and making the water unsafe for consumption. The other half is pumped through nearly 3,000 kilometers of sewer mains, often uphill, with hundreds of unreliable pumps that often fail. Chennai’s relatively flat topography makes the complex system impossible to efficiently manage.

With an increase in per capita water consumption, population density, and geographic expansion, Chennai has begun to construct desalination plants and distribution channels. Desalination triples or quadruples the cost of water production, uses vast amounts of energy, and negatively affects coastal environments. It exacerbates rather than solves the water problem by increasing the amount of wastewater that requires treatment. There is growing recognition that the sustainable management of groundwater resources is critical to mitigating the impacts of future climate shocks, significantly improving residents’ resilience to drought, and serving as a buffer during dry periods. 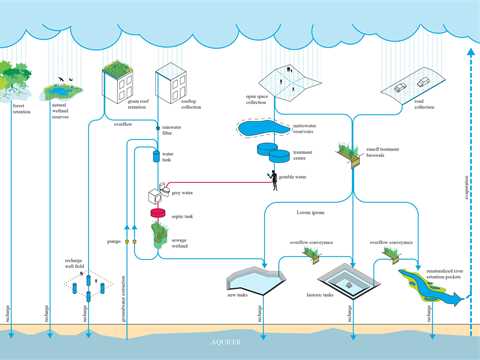 The City of 1,000 Tanks offers a comprehensive “water balance” strategy for Chennai to adapt to drought and flood risks as well as prevent water pollution. The program intends to achieve water security by collecting rainwater, treating wastewater locally, and using both to recharge the underground aquifer for later extraction. This will be accomplished with plant-based low-cost technologies that put nature to work in the collection, treatment, and storage of water. Measures such as constructed wetlands for sewage treatment, bioswales for runoff remediation, detention parks for stormwater absorption, and riverbank renaturalization can be integrated into existing neighborhoods to rejuvenate groundwater levels and solve problems locally.

By establishing the right incentives and protocols to maintain these alternative green technologies, the City of 1,000 Tanks will cost half as much per volume of water compared to desalination. Additionally, the natural technologies proposed here “close the loop” by resolving water supply, flood prevention, and pollution all in one go. They also improve air quality, reduce temperatures, and enliven public spaces. If the city shifted to resilient water sourcing, it could save the equivalent of 850 million USD per year and avoid annual carbon emissions of three million metric tons.

To develop a solution for the entire metropolis, City of 1,000 Tanks starts with flagship projects. Working together with experts, government officials, vulnerable communities, and other stakeholders, the interdisciplinary team begins with a heritage project in Mylapore, a disaster-resilient housing project in Chitra Nagar, a green industrial project in Koyambedu, and canal restoration in Mambalam.1 These projects will establish the necessary policies and connections between government departments and the private sector to implement a citywide water solution. Together, the projects can provide a water supply of 200 million liters per day, and if scaled up to the whole city, it could create a supply of up to 1,600 million liters per day.

This text is extracted from the paper Paradigm shift: The City of 1,000 tanks, Chennai presented by Eva Pfannes at the LafargeHolcim Forum for Sustainable Construction on “Re-materializing Construction” held at the American University in Cairo, Egypt. The full text is available as a flip-book via the link below: Sustainable supply and use of materials