The zabbaleen recycle 80 percent of the collected refuse. Here, plastic waste is sorted by color and then washed before being further processed. The zabbaleen collect and sort the refuse and then process the materials with machines purchased with a loan from Oxfam. Here, plastic waste gets crushed into pellets that are later sold to manufacturers. Here, plastic waste is sorted by color and then washed before being further processed.
» Download high-resolution version (JPG, 267.89 KB) The zabbaleen collect and sort the refuse and then process the materials with machines purchased with a loan from Oxfam. Here, plastic waste gets crushed into pellets that are later sold to manufacturers.
» Download high-resolution version (JPG, 3.12 MB)

A global discourse on materials must address the issue of the harvesting and repurposing of waste. Traditional waste management systems in the Global South are embedded in realities that are often too complex for systems based on the European model to understand. These informal, socially constructed systems are difficult for city planners to accommodate because they developed from the needs and realities of urban inhabitants and were not determined or implemented on a governmental level. They derive from the residents’ knowledge of informal markets and trading systems and provide the most destitute segments of society with incomes, livelihoods, trades, occupations, and economic growth opportunities that other sectors do not provide.

The waste collectors turn the city’s refuse into daily earnings so that they can care for their families, whom the state has left lacking in education and social services and for whom there are few prospects for improvement. Since they are not properly supported by the city, even though they achieve higher recycling rates and generate employment for significantly larger numbers of people than the official systems, the collectors end up adopting unsanitary and unsafe methods.

The beginnings of informal waste collection

The system of informal waste collection in Cairo began in the late 1940s. The waahis (“people of the oases”) performed this daily door-to-door service, repurposing paper waste to sell as fuel to food vendors and the public baths. They established a system of trash-collection routes among themselves. The waahis eventually began contracting the work to migrants from southern Egypt who had come to Cairo because of severe drought and religious friction in their villages. According to these informal work arrangements, the waahis hired the new migrants to collect trash on their routes, and these collectors would give the waahis the paper waste as payment and keep the rest, which primarily consisted of organic waste that they would feed to the pigs they raised in the city.

The waahis acted as labor contractors, and the zabbaleen (“trash collectors”) did the regular and tedious work of door-to-door collection, thus keeping the city clean. The history of the waahis and zabbaleen is specific to Cairo, but it resembles similar historical arrangements in other parts of the world – an ethnic minority, in this case Coptic Christians, already excluded, finds low-skill work in informal arrangements.

In 1984, Cairo and neighboring Giza created new regulatory bodies – the Cleansing & Beautification Authorities – to formalize and upgrade the region’s waste sector by documenting the collectors and banning the donkey carts used daily by the zabbaleen to transport the collected waste. The new authorities licensed the zabbaleen by delineating their collection routes, charging them a fee to collect waste from households, and allowing them to charge households a monthly fee for collection, which they’d have to split with the waahis for the contract work. The money the zabbaleen had left over scarcely covered the costs of operating and maintaining their vehicles, not to mention health and safety costs or other incidental expenses associated with providing their service.

Their lack of education and information led them to miscalculate revenues and profits. The cleanliness of cities had become intertwined with a context of poverty: a lack of the capability of the waste collectors to negotiate and participate in the workings of the system. The waahis’ agreement with the zabbaleen had been that they could keep whatever waste they wanted except for the paper waste. However, the value of paper had drastically diminished by this point; the public baths had shut down and the number of street food vendors was dwindling. Waste had grown to include glass, aluminum, tin, fabric, and so forth, which were harvested and repurposed by the zabbaleen alongside the organic waste. By signing a contract with the new regulatory authorities, the waahis were able to maintain their level of earnings despite the devaluation of paper, and the zabbaleen still relied on the waahis to give them access to the waste and materials.

As the cleansing authorities were being established, the development agency Oxfam brought trash disposal machines to Cairo, setting up plants in the southeastern area of Mokattam where the zabbaleen lived. This sparked an industrial revolution. The agency provided the zabbaleen credit to purchase the machines and install them in their homes so they could valorize the materials and not just collect, sort, and sell the waste. The trash collected in Cairo was now brought to Mokattam to be sorted and sold to neighbors for processing. The compacted, granulated, washed, and pelletized waste was then sold to the manufacturing industry. These zabbaleen began their own export industry, selling granulated and washed raw materials to China, but this channel was cut off when new laws put an end to the export of PET plastic.

In the late 1990s, the city responded to the need to expand waste collection and processing to the whole of Cairo and end its dependence on dealing with organic waste by feeding it to pigs. Composting plants were established that were expected to absorb a substantial amount of the city’s waste and replace the unseemly methods of the zabbaleen, namely pig breeding. However, the plants and facilities were poorly managed, poorly operated, and poorly maintained, and thus they weren’t able to replace the service provided by the pig farming.

In 2000, the population of Cairo reached twelve million and was generating 10,000 tons of waste per day. The zabbaleen were collecting between 30 and 40 percent of this daily waste and recycling 80 percent of what they collected. Local Egyptian companies were contracted to collect the waste in the neighborhoods not serviced by the zabbaleen and transport it to poorly managed municipal dumpsites. These sites became sources of billowing smoke that hung over the city of Cairo, which, together with the burning of rice straw in the delta region, created a suffocating atmosphere for at least two months of the year.

In 2003, the governorates of Cairo and Giza decided to unburden themselves of waste management by privatizing it. Contracts were signed with European multinational companies that had track records of keeping cities clean in Europe. The terms included waste collection from containers placed on the streets, ending door-to-door collection by the zabbaleen, and the transportation of waste to transfer stations and composting plants.

Only 20% of the waste was required to be recycled (compared with the 80% managed by the zabbaleen), and the rest was to be dumped in sanitary, engineered landfills. A fee for this new collection service was automatically added to each resident’s electricity bill. This system, however, neglected to factor in the socioeconomic reality of the city. The official data agency of the Egyptian government estimates that almost 33% of the country’s population lives below the poverty line. These inhabitants constitute a potential pool of scavengers, and informal markets can provide sources of income from the recyclables scavenged from waste pooling sites.

The multinationals could not attract the labor they required; the stigma attached to the occupation of trash collector acted as a barrier to unemployed youths joining their collection crews. The new trash containers placed on the streets were stolen at an alarming rate. Owing to the failure of the privatized collection system, a parallel system sprang up among high-income residents of the city that maintained the door-to-door collection by the zabbaleen. The residents gave them an amount they felt was fair while still paying the added fee on their electricity bills even though they were no longer receiving that service.

Municipal agencies responded to the unsatisfactory condition of the streets by implementing a rigorous monitoring of waste contracts. They frequently fined the multinationals for violations not always related to their contracts, and the fines often exceeded the amounts owed to the companies. This situation led many companies to stop their service and go into arbitration, eventually resulting in a breach of contract.

In 2009, when the outbreak of the H1N1 flu became known by the misnomer “swine flu,” the Egyptian government decided to take precautionary measures to protect the city from the possible outbreak of an epidemic. They hastily embarked on culling the pig population in the country, starting in the neighborhoods of the zabbaleen since most pigs were raised there, and then extending to the rest of the country.

The culling was criticized by the World Health Organization since the relationship between pigs and the H1N1 flu was denied by all authoritative international agencies. However, the official waste managers had made their decision, which left the city without its main organic-waste recyclers and further penalized the zabbaleen by taking away a significant part of their livelihood. The city was soon swimming in a sea of organic waste that the zabbaleen had no incentive to collect. To make matters worse, the pig culling ended right before the month of Ramadan, when food consumption and rates of organic-waste generation rise. All of this coincided with the strikes of the multinationals. The situation reached unsanitary levels the city hadn’t experienced in years.

Municipal waste managers must carefully consider replacing functioning traditional systems with seemingly modern and efficient ones. In Cairo, policies need to be implemented that empower the zabbaleen economically and providing them with sanitary and environmentally friendly conditions. In 2015, a waste-management regulatory authority was established to develop a new framework to counteract the mistakes of the privatization model. It is supposed to integrate the informal sector, support municipalities in contracting waste collection, and map the facilities. New policies need to work with existing informal networks to develop municipal infrastructure that attempts to be sustainable and equitable, even if it does not follow conventional Eurocentric models of urbanism.

This text is extracted from the keynote address Harvesting Materials in a World of Finite Resources presented by Laila Iskandar at the LafargeHolcim Forum for Sustainable Construction on “Re-materializing Construction” held at the American University in Cairo, Egypt. The full text is available as a flip-book via the link below:

Harvesting Materials in a World of Finite Resources 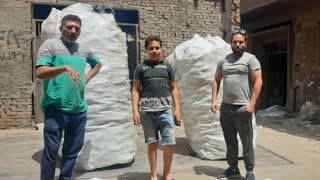