More than 34,000 visitors attended “4 Design Days” – the largest event for the property, architecture, interiors and design market in Central Europe. 300 speakers were invited to Katowice, Poland to examine topics relevant to global trends in architecture and design, including Edward Schwarz, General Manager of the LafargeHolcim Foundation for Sustainable Construction who was also part of the opening panel.

Welcomes from the Mayor of Katowice and the Marshal of the Silesian Voivodeship were followed by a keynote speech by renowned Finnish architect Rainer Mahlamäki, in which he examined “what the buildings we build tell others about us”. In the second keynote, Edward Schwarz outlined the impact that competitions like the LafargeHolcim Awards can have by encouraging architecture to respond to social needs: “What do an urban shading construction in Spain, a river remediation project in Morocco, a two-story school built of bamboo and cob in Pakistan, a post-Tsunami reconstruction master plan in Chile, and a structure made of compostable bricks in the USA have in common?” he asked. He then illustrated how each is a LafargeHolcim Awards prize-winner that lives up to the five “target issues” for sustainable construction including “ethical standards and social inclusion”. The social dimension of the Foundation’s “target issues” demands that sustainable design adheres to the highest ethical standards and enduringly enhance the collective realm. 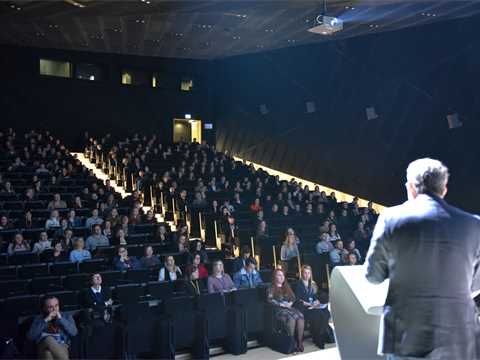 By highlighting how submissions in the five international competitions since 2004 live up to the “target issues”, Edward Schwarz explained how the topical focus of entries varies between the regions of the world from upgrading infrastructure and prefabricated housing in more developed regions to projects related to water and sewage, affordable housing and rural economy mainly in the Southern hemisphere. He put special emphasis on the first-ever prize winners from Poland: Student projects to convert a factory into housing and a monastery into a rehabilitation facility were awarded Next Generation 1st and 2nd prize 2017 for Europe.

In a workshop dedicated to people-centered success stories, Edward Schwarz presented the example of Francis Kéré, Global LafargeHolcim Awards Gold winning architect from Germany and Burkina Faso. Building schools in Western Africa is all about “people for people”, about learning by doing, about involving the entire community to enable education and a better life for the next generation of villagers. Achieving this goal requires much more than design, it is about coaching and building trust, about combining traditional skills with contemporary knowledge, about using local construction materials – or in brief: about living up to the “target issues” of sustainable construction by bringing the elements of the triple-bottom line together with architectural excellence with innovation that is transferable: so that good ideas can be copied with pride, and great ideas can become tomorrow’s norm.