A new model of sustainable rural housing in Colombia

Providing an alternative to urban migration with innovative and affordable dwellings

This project by Espacio Colectivo Arquitectos in Colombia offers a new residential and agrarian model for farmers living at high altitude in the mountains near Bogota. The combined residence and greenhouse proposes an affordable and modular housing solution that enhances farming conditions, reducing the economic pressure to migrate to urban centres.

Colombian architects Carlos Betancourt, Aldo Hurtado and Sebastian Contreras have responded to the housing and poverty crisis afflicting rural communities by designing a housing unit that combines living quarters and space to grow crops under a single greenhouse structure. The unit’s wooden frame and modular units can be dismantled easily and re-purposed, the materials used are responsibly sourced, and the dwelling also collects rainwater and condensed humidity in the high altitude Pàramos ecosystem. The result is a low-impact structure that is highly functional – with the possibility of adding on extra living space if needed – and that enables optimal farming in a controlled climate.

A response to a migration crisis

Colombia is South America’s second-most populous country after Brazil. It has the highest level of domestic migration in the world. Today, more than three quarters of the country’s 50 million inhabitants live in cities – 30 percent more than 60 years ago. The rural exodus that started at the beginning of the 20th century fuelled urban economic development of and industry, but migrating to the city now often ends in disappointment for farmers. A consequence of this demographic shift is that Colombia’s rural areas are economically underdeveloped and poverty-stricken, with few good housing options. This is especially the case in mountain regions, some at altitudes above 3,000 meters asl. In order to revitalise rural areas and develop their strong economic potential, it is paramount to create incentives for farmers to stay on the land.

A design inspired by tradition

The greenhouse designed by Espacio Colectivo is a wooden A-frame structure, fully glazed. It encloses both the house and an area in front of it that can be used to grow fruits and vegetables. The form of the building is inspired by Colombian vernacular designs and traditional construction methods were used for insulating the dwelling. For instance, a technique called bahareque was employed on the roof: this thermal and acoustic insulation system of soil, straw, and wood is widespread in rural Colombia. Rice husk is used as insulation in the cavities of the laminated guadua walls. 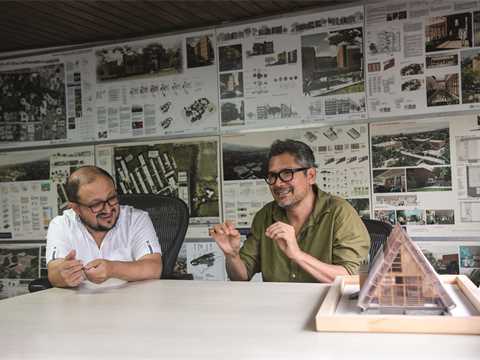 The A-frame structure was also chosen for practical reasons, being easy to build and optimally using sunlight. The water that runs off the roof is collected and used to irrigate the greenhouse and controlled ventilation ensures the circulation of fresh air.

The elements are designed to be prefabricated to ensure economical and efficient construction. The wall elements are made of laminated guadua, the most abundant and important bamboo species in Latin America as it grows quickly, is easy to work with, and possesses high axial strength. In selecting the building materials, the architects placed great emphasis on achieving an optimum combination of sustainability and functionality. For example, all wood is sourced from controlled, well-managed forests. Finally, the glass and the few steel components of the structure can be easily dismantled and replaced if needed, or recycled.

“Shifting Focus to the Land” in Sixth Holcim Awards