Hydropuncture: La Quebradora Waterpark in Mexico City is about to open. Supplying enough clean drinking water on the one hand and mitigating urban flooding on the other is a problem that is as commonplace as it is paradoxical in Mexico City. A project to tackle both infrastructural and social challenges of urban water management is already a success story – because for a long time it seemed it would be stopped, mainly by bureaucratic hurdles.

It was the perfect start to a success story. The project Hydropuncture: La Quebradora Waterpark in the borough of Iztapalapa, Mexico City, won the Holcim Awards Gold 2017 for Latin America. The competition jury was not the only group to be impressed by the innovative and creative approach by Manuel Perló Cohen and Loreta Castro Reguera. “Iztapalapa received funding and support from the Mayor of Mexico City to finish the project,” recounts Loreta Castro. And rightly so, because it focuses on the extremely important contemporary and future challenge of water as a resource in urban contexts.

To address these hydrological challenges, two roads also serve as stormwater channels to carry the runoff water to La Quebradora. There, the water seeps through a series of screens and filters into two permeable basins in the park that enables the water to infiltrate the underlying soil and groundwater. The park itself is open to the public and plays a role in community building by providing civic amenities including an open-air theater and useable green spaces. This ambitiously scoped project received growing endorsements and support to move from the drawing board into reality – including the Global Holcim Awards Gold in 2018. 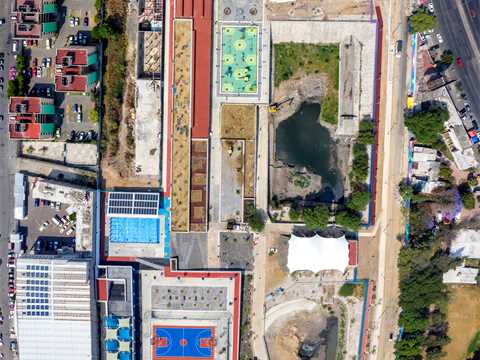 But architecture does not exist in a vacuum, and the realization of projects can be particularly complex. The implementation of construction projects often depends on political will, and this was the case with La Quebradora. Elections were held in July 2018 which brought to Iztapalapa a new mayor and new administration. One consequence of this election was that many infrastructure projects were stopped, including La Quebradora.

This development came not entirely unexpectedly to Loreta Castro: “This is one of the major problems with government transitions every six years in Mexico.” New administrations are generally reluctant to carry on the projects of their predecessors, so we hoped the project could be finalized within the administration term – but only three quarters was completed in time. The new administration claimed that not all the necessary licenses and permits were at hand, so the project had to be halted. “The entire country went through a very drastic change in political leadership, just like Iztapalapa,” explains Loreta Castro. 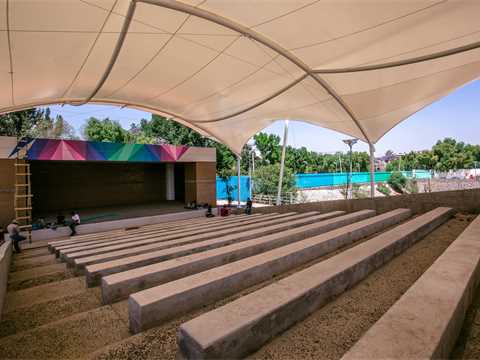 Of course, the project designers did not want to simply accept that the project could not be completed. They immediately contacted the new borough administration. “We explained that we were available to support them to clarify any doubts that might arise about the project,” tells the architect, admitting that she was driven by the principle of hope. Everything seemed to indicate that La Quebradora would suffer an untimely end. However, sometime later, the project designers were contacted by the authorities. Good news: the project can continue! “We have maintained good communication ever since.”

What was the reason for this change of mind on the part of the government of Iztapalapa? Loreta Castro has a very pragmatic explanation that the money was already invested by the previous administration. “Disregarding these allocations of funding would have been noticed and the subject of complaints,” she assures. “especially in a municipality where the great majority of inhabitants are living in poor conditions, lacking spaces for recreation and sports, and suffering from both excess and lack of water.”

The architects were informed that La Quebradora fits perfectly into the new Mayor’s program called Utopia. “The Utopia program of Iztapalapa City Hall is the implementation of public policies to address the various rights achieved and obtained by the citizens of Mexico City throughout history, seeking to prioritize strengthening the social fabric and reducing inequalities in the region,” explains architect Raúl Basulto Luviano, head of public works and urban development in Iztapalapa. “Utopias have social, cultural, recreational and sports spaces; spaces measuring preferably over 20,000 square meters are required to guarantee such a program.” So far, five projects have been developed under the program, and seven more are scheduled to follow. 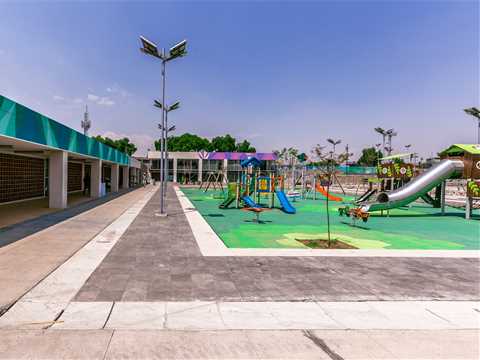 “Authorship needs to be relinquished at some point”

The project was modified in order to integrate it into the Utopia program. For example, an outdoor public pool with roofed areas was added. Solar panels were installed on the roof to supply energy for heating the facility. The open-air theater is not shaded by trees as originally planned, but by a membrane roof, which gives this element more weight within the overall ensemble. Finally, there have also been changes in the materials used. “Except for the pool, these changes will not interfere with the original idea of how the park will be used,” tells Loreta Castro with relief. “The hydric system, core of the project, is completely kept, and so are most of the park entrances. The park’s program is conserved as well, allowing the community to meet the needs that they set as a priority back in 2015.”

All in all, the architect asserts that most of the original concept that won the Holcim Awards prizes are ultimately being implemented. “After having gone through so many adversities, we are very happy to know that the project will finally be in service for the community,” she says. The project designers would have had to learn anyway during the course of the project that a public project is exactly that: public. “Authorship needs to be relinquished at some point,” says Loreta Castro. 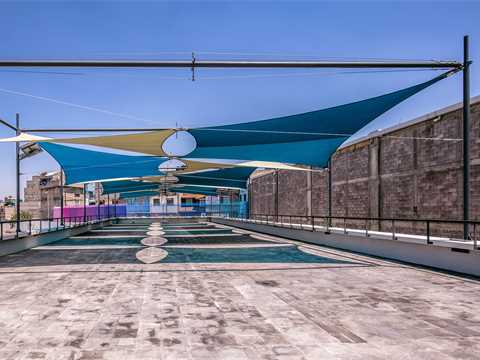 Reference and inspiration for further projects

What the designers regret perhaps the most is that the proposed system for the financial maintenance of La Quebradora will probably not be implemented. “We proposed a consortium formed by municipality, academia, community and the private sector. Through this instrument, the responsibility of maintenance would rest with a committee, instead of solely with the government, making it easier to take care of the place.” Nevertheless, the authors are gratified that La Quebradora as a pilot project is already serving as a reference for many other projects in Mexico City – and will continue to do so in the future. “There are many efforts showing that the way to think about water management today must include soft infrastructures, the scale of the borough, and with the involvement of the community,” says the architect.

La Quebradora has also served as a basis for other projects by the team of architects. They have since designed a park twice the size of La Quebradora for the municipality of Ecatepec in the Mexico City metropolitan area. “We have been implementing some of the strategies developed in La Quebradora such as infiltration terraces, rainwater-serviced public toilets, water towers, non-motorized mobility paths connecting relegated areas, and the introduction of endemic vegetation,” says Loreta Castro.

Another project linking together public spaces and water management has just been finished in Nogales, consolidating the poorly constructed dikes that contained an artificial body of water that used to overflow and inundate the surrounding urban area. An additional intervention is under development in Tijuana “aiming to restitute the path of water in a degraded ravine surrounded by informal settlements”, explains the architect. “The parks in Tijuana and Nogales are part of the urban renewal program set by the Ministry of Urban Territorial and Agrarian Development, headed by Minister Roman Mayer and conducted by Daniel Escotto, both architects,” says Loreta Castro, hoping that the political winds of change will not suddenly change course again.