Treading lightly on an archaeological site

Delivering an immersive experience to visitors

The first phase of enabling better visitor access to the Tracas de Pontevedra archaeological site has been completed. The Holcim Awards Acknowledgement prize winning “Bio-Palimpsest” project delivers an ecological approach to archaeological sites and offers an immersive experience to visitors on the Galician coast of Northern Spain. With the aim of sustaining local heritage and tourism the project by AGI architects will enhance eighteen ancient sites distributed around the town of Pontevedra. Instead of focusing on the ruins as objects separated from their context, the project re-embeds them within a whole environment.

The sites boast remarkable remnants of Galician-Roman settlements dating back to the 1st Century BC, including a number of Castros (Celtic forts) that have been fully or partially excavated. With the completion of the first three landscaping interventions in Alobre, Toiriz and A Subidà, visitors can meander through space and time, following an itinerary designed both to present and preserve the vestiges in singular ways. 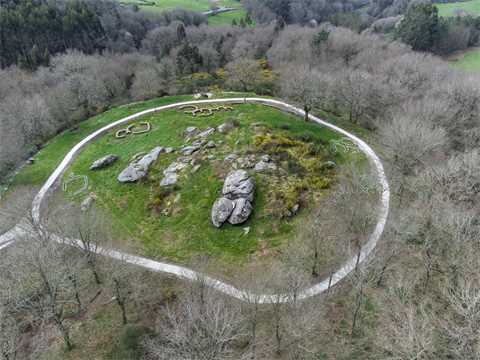 The three ancient settlements were approached as natural museums with the wider ecological context, telling their own story. Vegetation from Roman times is reinstated on the site. The botanical species are naturally adapted to local climate and lead tourists via a system of “information pikes” to gradually uncover a historical narrative. The plants also highlight salient areas of the settlements, underline the paths that visitors should follow, and serve to anchor embankments built to offer optimal views.

The positioning of the museum-building elements and urban furnishings such as benches also carries meaning in itself: in Alobre, where the visible remains of the ancient coastal fort look out at the sea, the information posts follow a rectilinear pattern evocative of the archaeological grid overlaid during excavation. 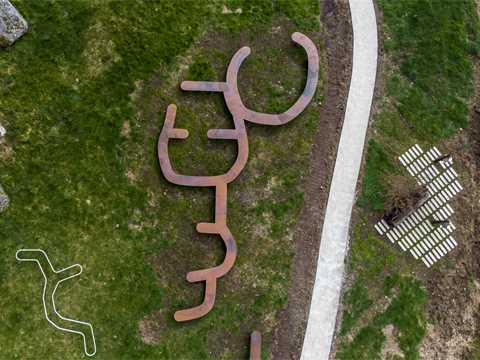 Pathways that don’t leave a footprint

At Toiriz and A Subida, where ruins are only partially revealed and further archaeological digs have yet to take place, the landscaping project has been sensitive to what may still lie underground. The pathways leading visitors up a gentle incline in A Subida were designed to avoid carrying out any groundwork that might damage the slopes. The climb is punctuated with historical information as well as paving elements signaling gradual elevation.

The viewing platform takes in the surroundings and the double-wall fortification bordering the site, displaying how the former settlement was strategically embedded in the landscape overlooking the Pontevedra estuary.

In Toiriz, the two-hectare iron-age encampment still lies mostly underground, but its fortified enclosures and large terraced area were revealed by a magnetic survey using ground penetrating radar in 2012. The landscaping intervention thus enables an intuitive grasp of the underlying groundworks by inviting visitors to follow a course peppered with a series of corten steel shapes replicating the contours of the subterranean fortifications. The shapes, made either out of cut steel or tubing, shadow what lies beneath whilst retaining a distinctly abstract feel that leaves room for the imagination.

The strategies employed in this first phase of the project are intended to be transferable to the other sites awaiting enhancement - and will offer a cohesive experience blending nature, culture, and design. As implemented in the first phase, layering techniques will be included in the following phases to bring together landscaping, sound and lighting. The sensitive design revives history in imaginative ways whilst sustaining local ecosystems and archaeological integrity.