A panel discussion staged by the LafargeHolcim Foundation in Paris on the theme “Architecture at what Prize?” confirmed how architectural competitions boost careers for both established and emerging architects. The LafargeHolcim Awards competition also makes tangible the commitment of LafargeHolcim to sustainable development and consolidates the Group’s reputation as a credible and innovative leader of the industry. Moderated by Jean-Philippe Hugron (Le Courrier de l’Architecte), the event at Maison de l’architecture Ile de France echoed the findings of a special issue of the international l’Architecture d’Aujourd’hui magazine: Entering architectural competitions boost projects, careers, and networking opportunities.

Former Awards winners Meriem Chabani of TXKL and Gilles Delalex of Studio Muoto together with Alexandre Theriot of BRUTHER, member of next year’s Awards jury for Europe, discussed the theme and provided tangible examples of how design competitions have given their projects and careers important momentum.

Weaving micro-economies into the urban fabric

“Winning a LafargeHolcim Awards prize has provided opportunities to meet people from all over the world and have ongoing discussions around sustainability,” enthused Meriem Chabani. Together with Étienne Chobaux and John Edom, she was awarded a LafargeHolcim Next Generation prize for Asia Pacific in 2014. Their project Re-Made Fabric analyzed the urban structures of cities in Bangladesh from the perspective of the micro-manufacturers in the textile industry.

She explained that thanks to the prize, their project has been widely published and presented at conferences: “We are currently in touch with a number of architects and city officials in Bangladesh to develop the project further,” she said. 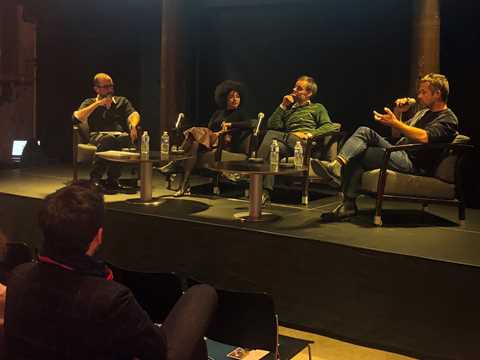 Turning low-cost construction into a strength

“The LafargeHolcim Awards are unusual because they recognize projects at the concept stage – before the project is built,” said architect Gilles Delalex. He explained how winning the LafargeHolcim Awards Silver 2014 for Europe helped to move his project towards realization. The prize endorsed the design and sustainability credentials of Public Condenser, the low-cost and adaptable university building in the new University of Paris-Saclay campus and strengthened public support for the design.

“Winning the LafargeHolcim Awards triggered a rise in awareness of our project,” he confirmed. The Lieu de vie campus hub designed by Muoto architects Gilles Delalex, Yves Moreau and Thomas Wessel-Cessieux opened in 2016. It was praised for turning the limitation of low-cost construction into one of the building’s great strengths – and earned the team the first LafargeHolcim Building Better Recognition for Europe in 2017.

Comparing apples and oranges with the “target issues”

Alexandre Theriot is Founding Partner and Architect of BRUTHER, an architectural practice based in Lausanne, Switzerland and Paris, France. His practice won the international competition for the Life Sciences Center at the Swiss Federal Institute of Technology (EFPL Lausanne). He will be a member of the nine-person panel of international experts forming the LafargeHolcim Awards jury for Europe in 2020.

“I look forward to being part of a diverse jury and the process of weighing up the entries until we reach a consensus on the next Awards winners,” said Alexandre Theriot. Submissions in the LafargeHolcim Awards must live up to the five “target issues” to the greatest extent possible: they aim to clarify principles for sustaining the human habitat for future generations, and encourage sustainable responses to the technological, environmental, socioeconomic and cultural issues affecting building and construction,” he said. “The “target issues” enable us to compare apples with oranges.”

The 6th International LafargeHolcim Awards competition is open for entries until February 25, 2020 and recognizes projects and concepts from architecture, engineering, urban planning, materials science, construction technology, and related fields. A comprehensive “Step-by-step” guide explains the evaluation criteria and illustrates how to enter the competition at www.lafargeholcim-awards.org.