The Next Generation category seeks visionary concepts and is open to participants up to 30 years of age, whereas the Main category is for projects that are ready for implementation. In the current competition, around half of the entries worldwide were submitted in the Next Generation category. “It has been a challenging set of discussions mainly because there were so many high-standard entries,” enthuses Jeannette Kuo. The Swiss architect and founding partner of Karamuk Kuo Architects served as head of the jury for Europe. The jury included professionals from across the region: Kristiaan Borret (Chief Architect, Brussels-Capital Region, Belgium); Nuno Brandão Costa (Brandão Costa Arquitectos, Portugal); Hélène Lombois-Burger (R&D Project Manager for Digital Design & Fabrication, Holcim Innovation Center, France); Eva Pfannes (Ooze Architects, The Netherlands); Sergei Tchoban (SPEECH architectural office, Russia); and Alexandre Theriot (BRUTHER, Switzerland/France). Further jury members from the Holcim Foundation Academic Committee were Marilyne Andersen (Professor of Sustainable Construction Technologies, EPFL Lausanne, Switzerland) and Dirk Hebel (Dean of Architecture & Professor of Sustainable Construction, Karlsruhe Institute of Technology, Germany).

Each winning idea highlights a different perspective of sustainability

The distinguished jury of experts was impressed by the quality of the projects submitted, explains Jeannette Kuo: “It was wonderful to see that the issue of sustainability is now discussed across the board in Europe. Many projects were dealing with materiality and issues of construction, some with new ways of understanding sustainability: social sustainability, for example, or infrastructural thinking behind how a building might evolve over time.” The jury for Europe refrained from ranking the Next Generation winners. “We had huge debates over the ranking of the projects,” recounts Jeannette Kuo, “and no argument seemed to be adequate.” Consequently, the experts decided to select four entries to receive the Next Generation prize ex aequo, including prize money of USD 15,000 each. Kuo: “All four winning projects highlight very different perspectives of the topic and therefore deserved a similar recognition.”

In addition to the prize money, each winner receives a personalized trophy featuring the Modulor of the Swiss architect Le Corbusier. The trophy base is made of ECOPact, a low-carbon concrete by Holcim, showcasing materials that enable circular flows and carbon-neutral construction. Holcim is the sponsor of the Holcim Foundation, which conducts the competition. “With their fresh ideas, the Next Generation Awards prize winners keep us at the forefront of sustainable and innovative building solutions”, says Jan Jenisch, CEO of Holcim. 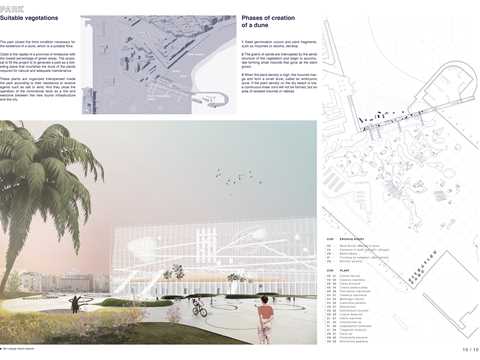 The cove of La Punta de San Felipe at the Andalusian port city of Cadiz is exposed to strong winds that cause vast amounts of sand to accumulate. Madrid architect Javier Estebala Alández proposes the solution of redesigning the coastal zone with a dune beach. “The project focuses on a large-scale transformation using the power of sea and wind to create a new geography in the city,” he explains. The design consists of three main elements. An imposing high-tech structure serves as a windbreak and catches wind-borne sand particles that settle at the foot of the structure. This creates the second element, a dune that will gradually grow over an existing structure. The third element is an adjacent jetty to be transformed into a public park. “The project plays with a whole range of topics,” praises jury member Marilyne Andersen, “with arts, the notion of shelter, comfort, and basic bioclimatic principles.” The Awards jury was furthermore impressed by the use of natural phenomena as part of the coastal reconfiguration. The project, according to their unanimous opinion, offers benefits for the population, the ecosystem, and tourism. Andersen: “It tries to bring everything into a utopian proposal. It has all the ingredients that show a convincing awareness to what makes a sustainable project.” 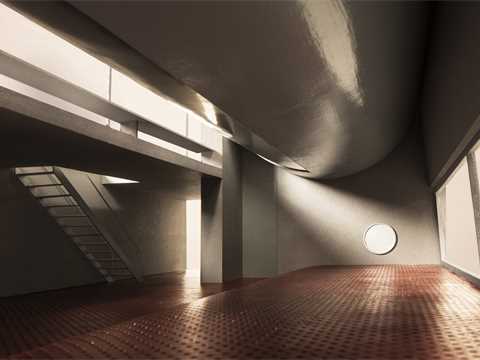 There are over 4,000 data centers in Switzerland, which require a great deal of energy and release an immense amount of heat. With his project, Yufei He, architect and scientific assistant at the ETH Zurich, plans to utilize this waste heat. He has designed a building that provides energy for Zurich’s heating and cooling network. The long, slender structure to be built on the banks of the Sihl River is both a waste-heat power plant and a residential building. Solar modules on the facades supply the data center with energy. The waste heat at 60°C is cooled by sorption machines to either 35°C or 12°C, ideal temperatures for heating and cooling. “The project raises contemporary questions at different scales,” says Yufei He, “from the energy network development in Zurich to a new form of living within the process of digitalization and densification.” The Awards jury was intrigued by the visionary qualities of the project. It offers aesthetic and functional solutions to environmental problems caused by data centers. “It feels natural to use waste for something else,” says Marilyne Andersen. “But it’s not so easy to implement this in an efficient way. It needs a network for the waste of one to become the input to another. In this project the value also lies in the materiality, in the bold design.” 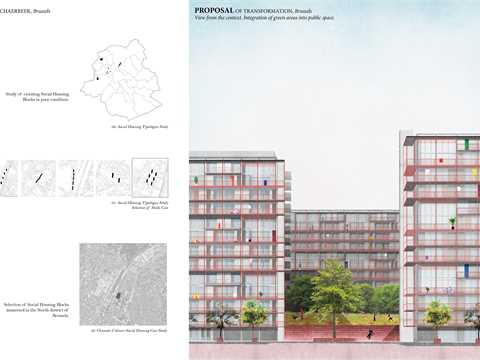 Reinterpretation of existing structures in Belgium

Population growth has led to a shortage of living space in cities such as Brussels. Responding to urban densification is therefore increasingly important. The project by Annik Keoseyan, architect and urban designer from Mexico City, proposes an upgrade of the social housing infrastructure. The concept is based on the principle of sharing: The buildings offer numerous different apartment typologies to accommodate every household size. Personal living space is minimized, whereas spaces that can be shared, for example kitchens and living rooms, are enlarged. This increases the useable space per resident. At the same time, overall space requirements and energy consumption are optimized and social interaction is intensified. The Awards jury commends the maturity and pragmatic nature of the project, which addresses two core sustainability issues: the reinterpretation of existing structures and the promotion of social sustainability. Marilyne Andersen explains: “It’s complex because it addresses many different dimensions of sustainable living. But it’s also pragmatic in the sense that it seems feasible. It embraces reality. It excels with its adaptability and flexibility.” Annik Keoseyan: “The Award gives the project a visibility that will help to push the idea into next dimension.” 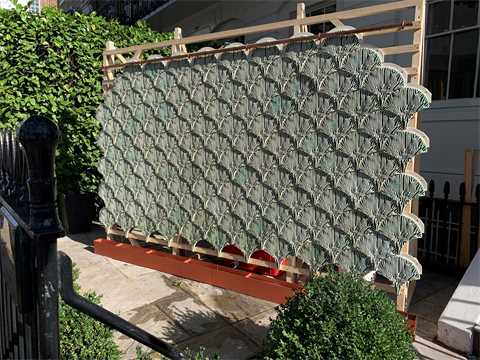 Microalgae for wastewater treatment in the United Kingdom

Water pollution is a problem in many countries, often due to a lack of adequate infrastructure for wastewater treatment. Shneel Malik, doctoral student at the Bartlett School of Architecture at University College London, proposes a system to purify water using microalgae: “It’s not only sustainable, it’s bio-integrated,” she says. “We aim at setting new forms of daily practices by rethinking our relationship to our natural resources – in particular, water.” The project is based on the ability of microalgae to convert complex organisms and inorganic waste into less toxic products. The algae are grown on ceramic tiles, and they isolate heavy metals from the water flowing over them. The design of the tiles is inspired by leaves and can be made with locally available materials. The tiles must be periodically renewed to maintain the system efficiency, and tile production and replacement provides new jobs. The Awards jury commends the effective approach of the project. Bio-based technology with simple production lends itself to widespread application. “What makes this project stand out is the very elegant, carefully crafted prototype,” says Marilyne Andersen. “The project tests itself against reality. It was actually built to see how it would perform on a one-to-one scale.”

Holcim Awards Next Generation 1st prize ex aequo 2020 Europe
Thermal Processor in Switzerland – Waste energy recovery for residential use
A project to convert the waste heat from a data center in Zurich into “free” energy for heating and cooling.
Winner: Yufei He, architect and scientific assistant, ETH Zurich, Switzerland

The worldwide total of 21 Next Generation category winners will be presented virtually, whereas the winning projects and authors in the Main category will be honored at a hybrid event at the international Venice Biennale of Architecture in mid-November 2021. At this event, the 33 regional winners will be celebrated and the winners of the global Holcim Awards Gold, Silver and Bronze 2021 will be announced.

Striving to make the world greener, smarter and healthier for all

The Holcim Foundation for Sustainable Construction was created in 2003 by Holcim as an independent legal entity to raise awareness of the important role that architecture, engineering, urban planning and the building industry have in achieving a more sustainable future. Holcim is the global leader in building solutions across more than 70 markets. The Group is reinventing how the world builds to make it greener, smarter and healthier for all.